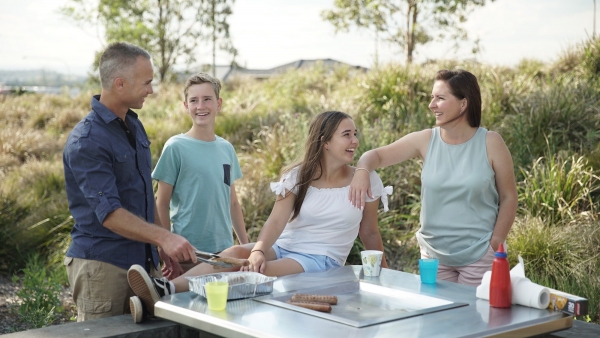 When Matt’s company decided to relocate from the inner city to South West Sydney, the commute became unbearable for him and his family. But when he discovered Gregory Hills, he saw an opportunity that was too good to pass up.

At the time, Kate and I were discussing the possibility of me looking for a new job that was closer to home. I’ve been with this company for 10 years; I love what I do and the people I work with, however the commute was taking a heavy toll on me and my family I was getting home after Evie and Mason were in bed, but more to the point, I wasn’t able to help Kate at home as much as I could before. It all fell on her to get the kids ready for school because I had to leave earlier to get to work.

One weekend we were invited to a friend’s house in Gregory Hills for a birthday. At the time we weren’t sure where it was and had to use the GPS to get there. Pretty quickly I realised I was heading in the same direction as work, and just jumped off a little later. When we arrived, we were amazed at how many people lived there and the kids were blown away by all of the parks.

After speaking with our friend about their experience, we started to think about it quite seriously. As Kate was running her own business from home the decision to move was an easy one. And now? Well, now I not only get to see my kids before they go to bed, but every Thursday I finish a little earlier and we head to Thomas Donovan Park and have a barbecue. Life has never been better.

The Miller’s story is just one of many at Gregory Hills. To begin your story, feel free to give us a call, send us an enquiry below or drop in to the sales office to talk with one of our friendly team members.