Health and wellbeing at the centre of Gregory Hills

Health and wellbeing at the centre of Gregory Hills 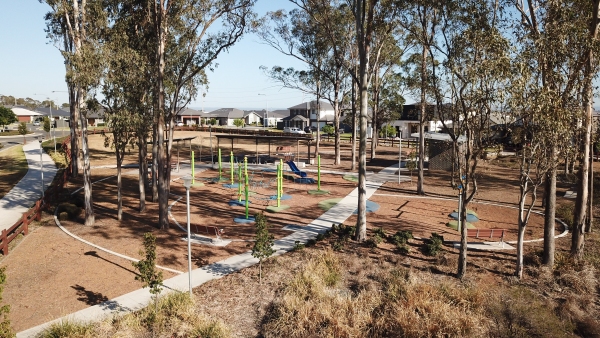 That’s the key first impression one gets when looking at Gregory Hills’ masterplan and then physically setting foot in the growing residential community in southwest Sydney, NSW.

And that’s not counting Cunningham Park and its assortment of sporting facilities that are set to open in the near future at the north end of Gregory Hills.

Arguably the centerpiece of Gregory Hills’ many green spaces is Champagnat Park, a connected corridor over rolling land that stretches nearly 2km from the bottom of Orbit Street and Hillston Circuit in the south to Gregory Hills Drive. The extensive scope of Champagnat Park demonstrates our commitment to creating beautiful natural spaces for the growing community.

Offering great views across Gregory Hills as it gently rises and falls, Champagnat Park features a collection of gym equipment spaced out in intervals along the sealed walking/cycling path. Within Champagnat Park is the Dog Park, a fenced off area complete with concrete tunnels and wide, open space perfect for resident pooches and fluffy friends to stretch their legs.

A close second is La Valla Park, which connects with the southern end of Champagnat Park. Taking the same corridor idea as Champagnat, La Valla Park sits in a shallow valley and winds along a small stream that flows into a pond. It is tastefully adorned with flora throughout, making for a very calming and relaxing stroll through the centre of the community.

The centrepiece for childhood fun in Gregory Hills will be Howard Park, to be connected to the north end of La Valla Park and adjacent to the Town Centre. Howard Park will offer fun for children of all ages, with a fenced area for infants, equipment for five to 10-year-olds, and climbing equipment, a half basketball court and outdoor ping pong tables for teenagers.

Children’s playgrounds can also be found throughout Gregory Hills’ many other parks, as well as picnic and BBQ facilities. Thomas Donovan Park and Currawong Park are certain to be hits with adventurous children, with climbing frames, swings and double slides. Parents can watch on from the comfort of well thought out seating provisions. Marcellin Park on the other hand is a toddler’s paradise and features a mini fire truck to excite the next generation of heroes.

A considered approach to land use

Once the estate is fully completed, residents will be able to walk, jog or cycle from its most southerly corner to its most northerly corner – and then back again via a different route – with only ever leaving parkland to cross roads. In addition, the quick trip to Woolworths at Gregory Hills Town Centre will soon be able to be completed via a relaxing walk through parkland via Champagnat and La Valla Parks.

The interconnected nature of the green spaces in Gregory Hills is such that you are rarely forced into close quarters with motor vehicles – a blessing to those with babies in prams or young children on bicycles.

Gregory Hills has always exemplified a considered approach to land use within our new residential developments. By offering residents a wealth of well-designed parks and useful nature-filled green areas, Gregory Hills is more than just a residential choice. It’s a lifestyle choice.